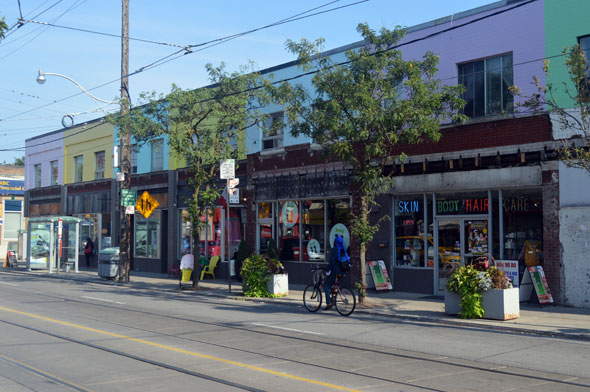 More big changes are coming to Little India. Nine stores at Gerrard and Coxwell are getting a complete overhaul in the hope of enticing new tenants and bringing a fresh look to the busy intersection.

News of the remodelling comes at a pivotal time for the neighbourhood; many of the South Asian families and stores that gave the area its name are moving out, and new enterprises like the Flying Pony cafe and the Gerrard Art Space are moving in. The changing character attracted the attention of the New York Times last week.

“Our goal is to help maintain the inherent charm this area has to offer,” said Vince Saroli, one of the owners of the row of stores. “We’re trying to give each store its own look and feel.”

As part of the upgrades, the strip on the south side of Gerrard, which includes Lazy Daisy’s Cafe and The Swag Sisters’ Toy Store, will be getting new paint, signs, and upstairs apartments.

According to Saroli, two new businesses, one restaurant and another in the service industry, are close to signing leases, meaning some of the current tenants could be about to move.

“We really do believe Gerrard and Coxwell is that new area where there’s still opportunity to do well as a business,” Saroli says. “Obviously we’re all for ensuring we improve the area as much as possible to match the changes in the environment.”

“The community is starting to change a little bit, we’re starting to get different groups coming in, and we want to make sure we can support the business that are there as well, and improve them.”

The work is due to be completed in about a month.