An interesting read on the history of houses on Queen, Greenwood and Ashdale

An interesting read on the history of houses on Queen, Greenwood and Ashdale

See a really interesting article by Laura Marks about the history of 1327 to 1339 Queen East, a row of century homes which is threatened with demolition.

The piece also has information on the Price house at 100 Greenwood Avenue and several houses at the foot of Ashdale Avenue.

By Laura Marks
ETCC Steering CommitteeA few weeks ago I visited the Land Titles Office to find out more about the history of the proposed development site at 1327-1339 Queen Street East. Once Belinda supplied the legal descriptions it was easy to find the documents relating to the lots at the LTO. The information gleaned from them provided new directions for research of the buildings.From the map of Plan 214:In 1857 John and George Ernest were owners of lot 10, Broken Front, first concession from the Bay, Ashbridge Bay to Concession Road (Queen Street), Leslie Street to Lake Street (Knox Ave).

The first listing in the list of Land Titles is for Lot 24 (1327 and 1329 Queen East), when John Greenwood (of Greenwood Avenue and of The Puritan Tavern, formerly at the northwest corner of Queen and Greenwood) bought Lot 24 from the estate of Henry William Savage in 1858.

William Vine was a butcher who owned and operated a popular tavern called the Butcher’s Arms, situated on the east side of Mill Lane, now Broadview Avenue between Hogarth and Sparkhall Avenues. The pub was the best known sporting house in the city. Regular cock fighting matches were held there. The Butcher’s Arms was frequented by horse racing men from the track located on the south side of Queen Street at Broadview and by the infamous Brooks Bush Gang, who terrorized East End citizenry and who were responsible for the murder of John Sheridan Hogan: printer, newspaperman, lawyer and politician in 1859. His body was found floating in the river in 1861, eighteen months after a botched robbery by the Brooks Bush Gang at the Don Bridge. William Vine died age 62 in 1879, but his wife, Frances lived on to a ripe old age into the 20th century.

In 1886 Robert Manson, another butcher, purchased all three lots from Frances Vine, but he defaulted on the taxes in 1891 due to his insolvency. In desperation he committed suicide by slashing his throat with a razor early one morning in May, 1903. His wife Annie, who was one of the founders and patrons of St. Joseph’s Catholic Church in Leslieville, paid the tax arrears in 1906 and 1907. She sold lot 24 and the west part of Lot 23 to to William B.P. Graham, bookkeeper at Graham Ice and Coal and brother of John C. Graham, President of Graham Ice and Coal. She sold Lot 22 and the east part of lot 23 to William Booth, who built the Yorkville Fire Hall (1876) as well as many other buildings in Toronto.

The Graham House at 1327 and 1329 Queen Street East was built for John C. Graham in 1906 by William J. Hewitt, a local builder who lived on Coxwell Avenue and who also owned lots 38-50 of plan 214, in other words, all of Connaught Avenue. The Graham House is widely admired and features lovely stained glass windows at the street view and in the side bays.

The building at 1337-1339 Queen Street East, the most easterly four-plex, was built and fully tenanted by 1912. The four-plex to the west, 1333-1335 was completed and all but one of the flats occupied by 1913. The Toronto Directory entries refer to the previous year. These two four-plex buildings are “one of a kind” in Toronto with their spacious porches and balconies, generous roofs and slim, square columns. The historically designated four-plexes of the Price Brother’s development of the mid to late 1920s in the Beach mimic many of the qualities of these originals. 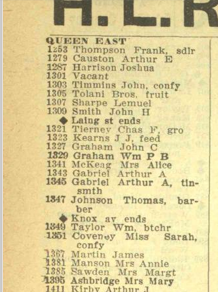 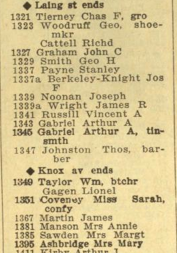 At Toronto Archives I found a permit granted in 1913 for a structure to be affixed to the side of the Woodbine Apartments on Queen Street East near Laing. This could refer to our four-plexes, or it could refer to the building directly on the corner. No specific address was named and I can find no trace of a mention of the Woodbine Apartments anywhere else. The name of the applicant on the building permit is William Bell, who was a specification writer for the celebrated architectural firm, Darling and Pearson. If the Woodbine Apartments are our four-plexes then the architects very well could have been Darling and Pearson. Another prominent Toronto architect who did work for William Booth was David Brash Dick (1846 – 1925) one of the founders of the Arts and Letters Club, who designed a house for William Booth on Avenue Road just south of Davenport in 1878. 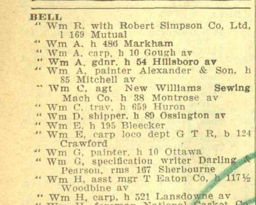 To date I haven’t found a building permit for either four-plex building. There may or may not be one because the Toronto Architect’s Office was severely understaffed and housing development in Toronto was very intense at the time the four-plexes were built.

Around the first decade of the 20th century the form of multi-unit residences in Toronto was in its infancy. There was widespread opposition to the construction of apartment buildings on the grounds that neighbourhoods were being devalued by the inclusion of “tenements” for single people or people who couldn’t afford an entire house. In May 1912 by-law 6061 was passed declaring it necessary to have 500 feet of yard space around each dwelling for each suite on the ground floor, and that tenements or apartments could only be built on commercial streets. A way of circumventing the by-laws was to build two semi-detached four-family dwellings as opposed to one large building.

There was a scarcity of trained examiners in the Toronto Architect’s department of the time because of poor pay. There were 50 new permits per day and a month long wait for approval. By June 1912 the old by-laws were unobtainable and in the neighbourhood of 100 new laws had been amended but not yet passed. By August 1912 the City Architect had suffered a nervous breakdown from overwork and was at home under a doctor’s care. There were 250 permits awaiting attention. Many buildings were being erected without permits. However, it’s unlikely that buildings in such a prominent position as Queen Street would have been built without a permit. Local residents were up-in-arms about apartment buildings being built in their neighbourhoods and builders were being reported to the authorities for building without a permit. I’ve come across several building permits applied for by the Booths during the relevant time, but none so far have been for the four-plexes.

Four-plexes of the general vintage of ours seem to be quite rare. I know of only two other groupings in Toronto.

The other early group of four-plexes that has come to light is at the south end of Ashdale Avenue. These four-plexes were built some time between 1914 and 1917 and bear some resemblance to Henry Simpson’s four-plexes at King Street West. Further research is needed to find the exact year of construction and the architect, possibly leading to information about our Queen Street four-plexes, which pre-date these and may be the template for all of the four-plexes in the east end. 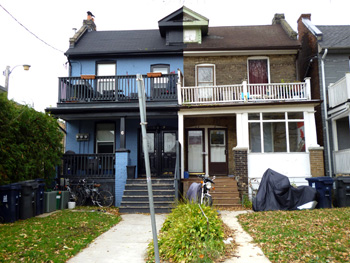 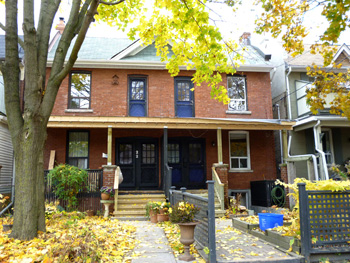 My sincere hope is that the City’s Heritage Preservation Department will soon begin their study, carrying on from the findings of my research. Using their expertise and their greater access to information I’m hopeful they can confirm the provenance of our four-plexes beyond any doubt to firmly establish their preeminence as among the very first relatively small multi-unit purpose-built Toronto dwellings, preserving 1333-1339 Queen Street East by means of a heritage designation.